On a brilliant blue-sky day in Greece, after awakening early to say goodbye to Paros, return my bike, and take the last walk along the port and through the old settlement village, Luciano walked me to the ferry. I settled into my seat on the top tier outside with the wind against my face and bid a fond farewell to an island that captured a huge part of my heart. With hundreds of people on the Saturday afternoon boat, what was my surprise to literally bump into a woman who had been in my yoga class? We enjoyed each other’s company for the five-hour boat ride discussing lives lived thousands of miles apart, bound by the threads of womanhood, using fragmented sentences, facial expressions and highly active hands.

Paros to Athens was similar to the earlier transition of Edinburgh to Istanbul. So much activity, bustling, rapid movements, looking left to right to ensure safety of one’s life while crossing streets, and lots and lots of people everywhere — until I reached the sanctuary of Joe’s home in the neighborhood of Mets. After welcoming the evening with a delicious Greek Rosé on his patio, not far from the Acropolis, we enjoyed dinner at MAHNMAHN, an upscale restaurant, which specializes in modern Greek Cuisine. The food was simply delicious.

The story I wish to tell, however, is the walk after dinner beginning at midnight. The full moon was bright enough to allow us to safely stroll along cobbled streets to the top of a hill where we had an exquisite view of the Acropolis. But it was the getting there that took my breath away. With each step we saw different perspectives of the Acropolis surrounded by old parts of the city where the architecture and history came alive as Joe, a Greek architect, described to me in great detail the history of what we were seeing. We came across a small, very old church, which had centuries ago been elegantly landscaped and designed with a minimalist’s eye, and I breathed in the history of this ancient city. 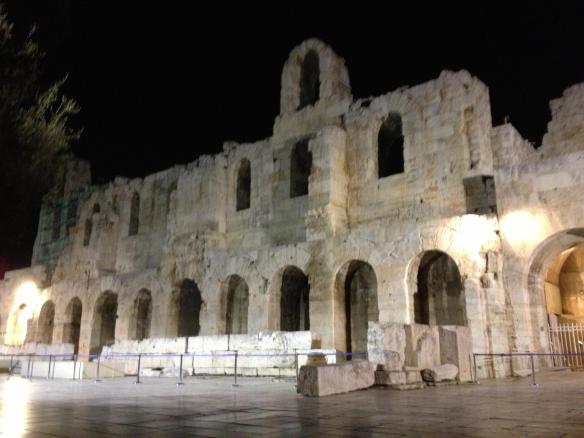 Marie Gewirtz passionately advocates sustainability as a way of life for current and future generations. For three decades, through her company, Marie Gewirtz Public Relations & Marketing, she has helped clients in the Wine Industry identify their core message and translate their individuality into highly effective marketing and PR campaigns. Marie is currently traveling throughout Europe,and this blog is a result of her visits to Scotland, Turkey, Greece and France.